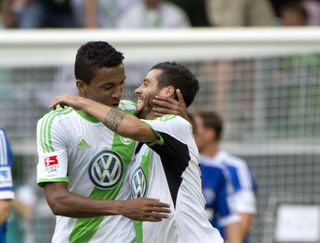 Second-half goals from Robin Knoche, Vieirinha, Naldo and Stefan Kutschke sealed an emphatic triumph at the Volkswagen Arena, with Gustavo making his first appearance since a reported €17million move from Bayern Munich.

Gustavo rejected strong interest from Arsenal to remain in the Bundesliga, despite the English club competing in the UEFA Champions League.

And after defeating another side who will feature at Europe's top table this term, Gustavo sees no reason why Wolfsburg can't make it back to the Champions League for the first time since 2009.

"Bayern and (Borussia) Dortmund are both leading the way," he told Bundesliga.com.

"Behind them, there are many sides who want to play in Europe and also have the quality for it.

"But we also have very good players and we want to keep together and play good football. And of course we want to be challenging up there."

Gustavo was satisfied with his performance against Schalke, but credited his team-mates with making it easy for him to slot in to the midfield.

The Brazilian also expects his performances to get better as he becomes acclimatised to his new colleagues and surroundings.

"I’m a simple guy and I know what I can do," he added. "My team-mates also made it easy for me, though. Wolfsburg are a top club after all.

"I’ve only just got here and hardly had any time to talk at length with anybody, but I’m sure it will be helpful when settling in and getting used to a new city.

"This was just the beginning. My team-mates and I still have to get used to one another.

"Also, I don’t have a home here in Wolfsburg yet. Once all that is sorted out, and then when I have my girlfriend here, I will feel a lot better."