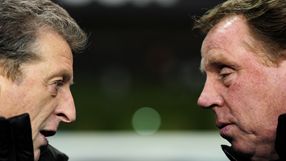 "I wish him [Hodgson] all the best. He's a great guy. I've got a great job here. I don't hold grudges. I'm very fortunate to be working with fantastic players here every day."

West Bromwich Albion manager Hodgson was due to meet FA officials on Monday before any final decision is made on appointing a successor to departed Italian Fabio Capello.

The FA have said Hodgson, a former national manager of Switzerland, Finland and the United Arab Emirates, is the only candidate they have approached despite Redknapp being a popular favourite.

Redknapp said his focus was on securing a Champions League spot for Spurs, currently fourth in the league and four points behind third-placed Arsenal but with a game in hand, and his future at the North London club.

"I suppose it's dragged on but I just get on with my job here," he said of the drawn-out deliberations over who will take England to Euro 2012 in Poland and Ukraine in little more than a month's time.

"We'll really try to get that Champions League spot now... that's always been the focus. I bear no grudge against the FA and will continue to focus on Tottenham," Redknapp added.