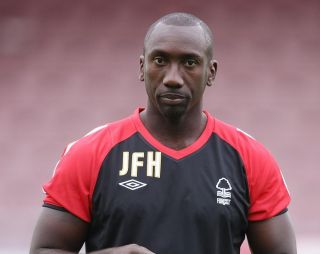 The former Netherlands international was confirmed as Rowett's replacement on Thursday at the League Two club, just over four months after leaving his previous role in charge of Royal Antwerp.

Rowett departed the Pirelli Stadium last month to take over at Championship side Birmingham City and Hasselbaink has been given the nod as his successor.

And Hasselbaink, whose playing career saw him feature for Chelsea, Atletico Madrid and Leeds United, is relishing the chance to get started at Burton.

"When I was given the opportunity by the chairman I could not say no," Hasselbaink told the club's official website.

"I'm very excited to join Burton Albion and follow in the footsteps of Gary Rowett and Nigel Clough.

Hasselbaink, who worked as coach at Nottingham Forest before moving to Antwerp, brings David Oldfield with him as assistant manager.

The Dutchman faces a challenging start to life in charge at Burton with fixtures against fellow promotion chasers Wycombe Wanderers and Luton Town before the end of November.