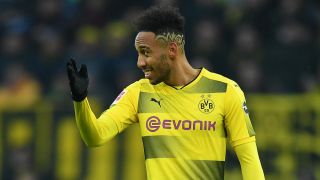 Borussia Dortmund boss Peter Stoger admitted Pierre-Emerick Aubameyang "has had better games" after his side drew 2-2 with Freiburg on Saturday.

The Gabon international started the Bundesliga clash at Signal Iduna Park despite continued speculation over a possible €60million move to Arsenal.

Aubameyang produced a listless performance, though, managing just one shot, one key pass and one touch in the Freiburg penalty area throughout the 90 minutes, while he only completed 14 passes in total.

Stoger conceded it was a disappointing display from the 28-year-old but was unhappy with the amount of service he received from the rest of the team.

"I would say he has had better games," Stoger told a news conference. "On the one hand, it certainly wasn't his best game but, on the other, we didn't manage to give him decent service.

"In the end, he is part of a larger group of players who didn't have their best performance."

Dortmund took the lead through Shinji Kagawa but Freiburg turned the game around thanks to two goals from Nils Petersen, and it took an injury-time strike from Jeremy Toljan to snatch a point.

Petersen's second was an outstanding long-range chip, which came after he cut out a Nuri Sahin pass, and the Dortmund midfielder took the blame for the goal.

"I can't really say I'm that satisfied about this point," Sahin told Sky. "It's better than losing, of course, but nonetheless I'm not really happy.

"We had far too little movement in our game and our passing game wasn't tidy. Then they went 2-1 up because of an individual mistake from me. That cannot happen and I fully take the blame for it. I didn't know Petersen was there and I can only apologise for it.

"I'm already a little bit concerned about our targets. We need to qualify for the Champions League, but our results currently do not suggest we're heading in this direction. We're struggling going forward, we need to create more chances and make better use of them."