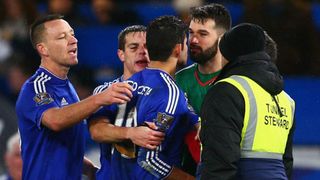 Chelsea interim manager Guus Hiddink insisted he has no plans to curb Diego Costa's aggression, despite the striker's actions on Wednesday.

Costa endured a frustrating outing as Chelsea and West Brom played out a 2-2 draw at Stamford Bridge, with the Spanish hothead venting his annoyance by punching the tunnel at full-time.

The 27-year-old's actions came after a number of running clashes throughout the contest, namely against Claudio Yacob and goalkeeper Boaz Myhill.

However, Hiddink leapt to the defence of Costa when asked if the player's behaviour had crossed the line.

"I think there was a little space left. The central defenders were provoking him and he was causing danger continuously. It [the aggression] was mutual.

"They were challenging each other. I didn't see any bad things. If you have to push the players it's difficult to survive in the Premier League. Every now and then if you have to control them it's much better."

Of the tunnel incident, Hiddink added: "We can repair that easily enough, that's not a problem. He is an emotional guy and I like that very much.

"If you have to push your players [to get angry] it's difficult to survive in the Premier League."