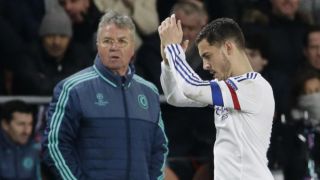 Guus Hiddink has spoken with Eden Hazard in a bid to improve the Belgian's below-par performances for Chelsea.

Hazard was an influential figure as Chelsea secured the Premier League title last season, starting every league game and scooping the PFA Players' Player of the Year award as a result of his stunning performances.

Hazard has been consistently beset by niggling injuries throughout the campaign, and interim boss Hiddink, who will make way for Antonio Conte at the end of the season, has told the Belgian he must prove his worth.

"It's a long period of absence. It was alarming," Hiddink said ahead of Saturday's meeting with Manchester City.

"I've told him 'hey, you must now start performing'. It's difficult when one has been player of the year, and then had this drastic fall of form.

"Also due to injuries, but it is a complex situation, going into injury and not in top form - that must be alarming.

"It has gone through my head - what can I do to help get him back on track?

"I think he fell too much into injuries and had difficulties to come back."