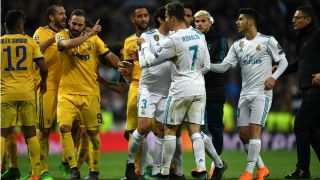 Cristiano Ronaldo's potential arrival at Juventus would be welcomed by Gonzalo Higuain, according to the striker's agent.

Reports emerged on Tuesday that Juventus had lodged a bid to Real Madrid for Ronaldo, who is heading into his 10th season with Los Blancos.

Ronaldo and Higuain played together at Madrid between 2009 and 2013, before the Argentinian moved onto Napoli, where his scintillating form earned him a switch to Turin.

And although Ronaldo's hypothetical arrival at the Serie A champions could threaten Higuain's place up front, his sibling Nicolas is positive there would be no issues.

"We don't know anything yet. He was team-mates with Cristiano Ronaldo at Real Madrid, but they haven't spoken about it," Nicolas Higuain told Sky Sport Italia.

"It would be fantastic obviously, especially if he made a strike partnership with Gonzalo.

"They know each other so well, as they played about 80 games together. If Juve can do it, this will be fantastic, just spectacular. It's hardly new for them to work together."

Regardless of Ronaldo's situation, uncertainty remains over Higuain's future at the club, with rumours swirling that ex-Napoli boss Maurizio Sarri will look to bring the player to Chelsea should he take over at Stamford Bridge.

However, Nicolas refuted suggestions that Gonzalo was looking for a way out of Juve.

"At the moment we haven’t spoken to any other clubs, as we have a three-year contract with Juventus," he added.

"He is very happy in the city, at the club, with the coach [Massimiliano Allegri] and the tactical system.

"Everyone knows his rapport with Sarri is wonderful and he sees him as a football father, but as far as I know, Sarri hasn't even signed for Chelsea yet. Secondly, Gonzalo is happy in Turin so I see no real chance of leaving."