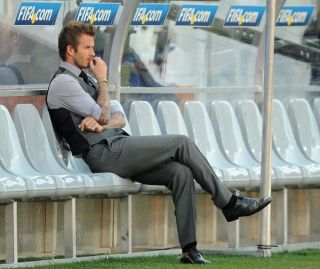 Former England captain Beckham's presence has been missing from the game after his retirement last year after a short spell with French powerhouse Paris Saint-Germain.

Beckham has previous experience on England's bench after taking a role under Fabio Capello at the 2010 World Cup in South Africa.

And having added Beckham's former Manchester United and England team-mate Gary Neville to his coaching staff, Hodgson has welcomed the offer to boost his backroom staff.

"Someone of David's stature, with his qualities and personality, I'm 100 per cent certain if he can find the time to lend his presence to the FA they would be happy to find a role for him," Hodgson told BBC Radio Five Live's Sportsweek.

"If he could make himself available for England in some way or another I have no doubt in my mind that [FA chairman] Greg Dyke and [FA general secretary] Alex Horne would welcome his presence within an England capacity."

Beckham is England's most-capped outfield player with 115 international appearances, 59 of which were as skipper.