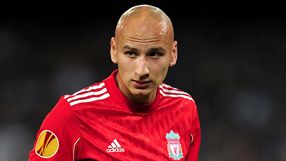 Shelvey, 18, moved to Anfield from League One side Charlton Athletic over the summer and Hodgson has encouraged the England Under-19 captain to use Gerrard as his role model, if he wants to make it at the highest level.

And the former Fulham supremo is already impressed with the progress Shelvey has made, as he continues to get used to life on Merseyside.

"He realises it's a massive step from getting in the Charlton first team early on and receiving a lot of plaudits. Those things earned him a move to Liverpool and he's come in and worked very hard.

"He's got a lot of players around him who can help and be an inspiration to him. With the way he likes to play, the level of his passing and technical ability, I'm sure he's looking at Steven Gerrard and thinking, 'Could I become as good as that?' It's nice to have that kind of role model.

"Jonjo is also a team player, as he has shown on several occasions by playing in different positions."

Romford-born Shelvey was Charlton's youngest ever player when making his debut aged 16 years and 59 days, before moving to Anfield for a fee that could be worth up to £3.4 million for the Addicks in May.