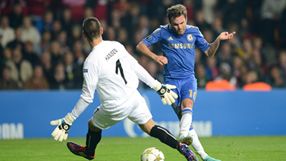 The Londoners went ahead in the 33rd minute when Fernando Torres robbed midfielder Enoch Adu and passed to Frank Lampard who deftly set up Mata to fire home with his left foot.

Joshua John twice went close to an equaliser for the home team, forcing Chelsea goalkeeper Petr Cech into a spectacular finger-tip save on to the post in the second half.

David Luiz then made it 2-0 with a venomous free kick in the 79th minute before Mata side-footed the third goal in the 82nd.

Ramires completed the scoring from close range with one minute to go.

"It was a crucial save at that stage of the game," Italian Di Matteo told reporters. "When the scoreline is 1-0 it's always dangerous and they were committing players forward.

"I think we were a little bit slow in the first half but much better in the second. Once we scored the second goal we knew we were going to win the game."

Nordsjaelland, beaten 2-0 at Shakhtar Donetsk in their opening match last month, made a jittery start but gradually their confidence grew and they gave the champions several worrying moments.

Centre-back Jores Okore was their best player and he almost set up a goal when his lofted ball found Mikkel Beckmann unmarked 10 metres out and his looping header sailed just over the bar.

Chelsea's anxieties were eased when Torres had his shirt pulled just outside the box and Brazil defender David Luiz shot home off the woodwork.

Mata grabbed his second goal after carefully picking his way through the defence before Brazil midfielder Ramires latched on to a pass from countryman Oscar to convert the simplest of tap-ins.

The final scoreline was harsh on Champions League debutants Nordsjaelland who gave a plucky performance.

"It would have been fun to see the score 1-1 after 73 minutes," said coach Kasper Hjulmand referring to Cech's wonder save.

"But we didn't do enough in the last 10 to 15 minutes and 4-0 looked pretty stupid on the scoreboard at the end."

Di Matteo saluted Torres after the Spain striker was involved in all four goals.

"He was excellent," said the Chelsea coach. "It's a shame he didn't score when he had a chance in the first half.

"But he played very well for the team and was always a threat."

"He was very good," said the former Italy midfielder. "In one against one situations he handled himself very well.

"He's got good pace and is good physically. He has a bright future."

Chelsea, top of the group with four points from two games, next visit Shakhtar on October 23, the same day as bottom of the table Nordsjaelland entertain Juventus.