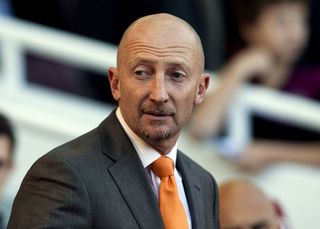 The colourful Bristolian has a reputation for quick wit with the media, but is determined to be taken more seriously for his work as a football manager.

Holloway has experience of managing in the Premier League, after guiding former club Blackpool to the top tier of English football in 2010.

And having achieved the same feat with Palace, the 50-year-old has promised to be more serious.

"I'm trying to talk in a way so people don't think I'm funny anymore, I'm fed up with that," he said ahead of Palace's opener with Tottenham on Sunday.

"I'm not a comedian, I'm a football manager - at the end of the day that is what I do. You will have my interviews every week and they will be serious and I will be talking about football."

Holloway has been busy preparing Palace for their first Premier League campaign since they were relegated in 2005 and start their season when they welcome Tottenham to Selhurst Park on Sunday.

And Holloway admits it has been hard to keep up with rival sides.

"I'm watching clips of people and trying to play catch-up. I have watched Tottenham and I know what I'm doing," he continued.

"But I've also watched players and I don't think at this time last season Palace would have had a scouting network across Europe - it is tiring and it is hard work."