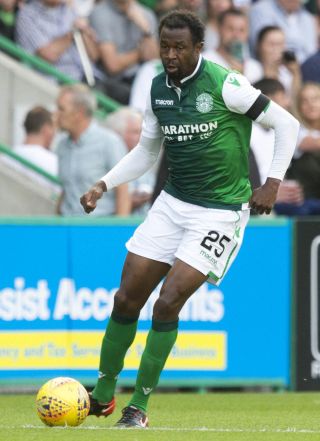 Livingston manager Gary Holt is convinced ‘risky’ Efe Ambrose is only going to get better after making an impressive debut against former club Hibernian.

Ambrose had not played for almost 14 months but was given a debut at Easter Road after signing last week – and helped the Lions to a 1-1 draw on his old stomping ground.

Christian Doidge gave Hibs the lead four minutes after half-time but a leveller from Aaron Taylor-Sinclair just six minutes later ensured Livingston stay above their hosts and on course for a top-six finish.

Ambrose was something of a cult hero for the Hibs fans before leaving in January last year and Holt expects the former Celtic defender to now have a major influence on his Almondvale outfit.

He said: “Efe will get better. He was good, he was very good.

“You know with Efe he will risk it in certain areas but he was only in some part of the week and so he’s getting to know how we play and what areas we’re looking for him to play in.

“But I think you saw his defensive qualities were excellent and that will certainly come to the fore the more games and weeks we have with him.

“The other players will get to know him as well and he’ll take on board the pictures we paint in training.

“He is a big character but he just wants to play football and win games. He hasn’t played for a year but it didn’t look like he was tiring or as though he was cramping up.

Hibs passed up a gilt-edged opportunity to make the breakthrough in a stuffy first-half when Taylor-Sinclair was adjudged to have handled Martin Boyle’s cross in the box – but Robby McCrorie pulled off a superb save to stop Scott Allan’s penalty.

The hosts began the second half strongly and took the lead in the 50th minute when Greg Docherty’s cross-cum-shot was turned in by Doidge for his 17th goal of the campaign.

The lead did not last long, however, as wing-back Taylor-Sinclair arrived late at the back post to poke in a wonderful Steven Lawless cross.

Both sides had half-chances to win the contest as time ebbed away and Hibs felt they could have had a second penalty for handball against Ciaron Brown late on.

Having taken the lead and had a penalty saved, the home team may see this as a missed opportunity.

But, with just one defeat in 10 matches since returning from the winter break, manager Jack Ross refused to be too hard on his players.

He said: “If we had been behind in the game and rode our luck you’d be saying it’s OK but we had the penalty and missed it and then we went ahead and looked OK in the game.

“It’s all ifs, buts and maybes when you get to that point. But the truth is we’re still a point closer to Aberdeen.

“It is what it is. Our record post-break has been really good and I have just emphasised that to the players.

“We said we weren’t at our best but we’re still proud of what we have done over the last eight or nine games now.”