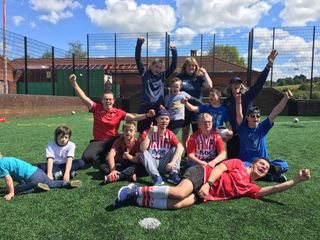 It is sometimes said great players often struggle as coaches because they cannot understand why others might not be able to do things they found easy, leading to unfair expectations and frustration.

Empathy is the key, then, and it is a word that has been used to describe the bonds Pep Guardiola, Jurgen Klopp and Mauricio Pochettino have with their players.

A talented player, Palmer was once offered a trial by Stoke City but could not afford to get there.

Lot’s of happy faces at our Down’s Syndrome and Power Chair sessions this morning 😃😃 #EveryPlayerCounts#thisCITYcan@EFLTrust@WembleyTrust@DSActive@The_WFApic.twitter.com/mVLMbQ3nX5— CITY Community Trust (@ExeterCCT) May 11, 2019

When her team’s goalkeeper got injured once, her teammates persuaded her to deputise as she was the next best option, despite having a broken wrist. She started the game in a soft cast and broke her ankle.

But Palmer has also struggled with injuries people cannot see and six months ago her mental health deteriorated to the point she had to be sectioned. After a tough run of events – losing a job, dropping out of college, the death of a close friend – she needed help.

She has always wanted to help others, though, sometimes to her own detriment. While doing a catering course at a local college, she also coached Plymouth Argyle’s autism and under-nine teams – timetable clashes were inevitable and her health suffered.

Homeless, she contacted the Amber Foundation, a South West-based charity that supports young people, and it put her in touch with the League Two club’s community trust.

Read our body image research for #MentalHealthAwarenessWeek. Who is affected, what are the causes, and what can we do to stop body image concerns leading to mental health problems? #BeBodyKindhttps://t.co/73AuKLLIOc— Mental Health Fdn (@mentalhealth) May 13, 2019

Speaking to Press Association Sport to mark this week’s Mental Health Awareness Week, Palmer said: “Life got a bit chaotic and my mental health went downhill quite quickly whilst I was at college. I was sofa-surfing, with no stability and no routine.

“It was when I was living with one of my friends in Plymouth that my support worker put me in touch with the Amber Foundation and they got me involved with Exeter City. From there, my passion for football and coaching came back.”

In early 2018, she volunteered to help the club’s powerchair team and has since taken on the Down syndrome group.

“My aim is to work with children with autism or those have been through the care system. I love coaching disability football and I think I have more of an insight into how hard it is than most. I’m able to connect on their level.

“Swansea came down to give us a game last week and our guys were amazing. They can all play now and I’m so proud of them.”

And Exeter City are proud of her.

The community trust’s disability officer Will Allan said: “Chloe has become a key member of the team – she has a natural talent for coaching young people and is fantastic at connecting with some of our less confident players.”

Palmer said: “Being able to help other people is a nice feeling – I can have an impact and take myself away from my own thoughts. And the support I’ve had from Will is something I’ve not had before.

“My medication puts weight on and that makes me feel low. I don’t like it but I have to balance that with my mental health. I know if I don’t take it I won’t be in a good place. It’s hard, though, because I want to feel confident in my own skin.

“Football really helps, though. After a session you feel like you’ve really done something.”

That sense of accomplishment is something Ruth Box understands.

Having struggled with anxiety before, Box was diagnosed with depression in her final year at a university. If that was not tough enough, she then broke her back in a horse-riding accident.

“It was a very difficult time,” the 24-year-old from Kent said.

“I had always been an outdoors sort of person but it took a long time to get mobile again and I put on weight.”

But a friend suggested she try something that seemed ridiculous at the time – she hated swimming, cycling and running – but has ended up transforming her life: triathlon.

“The training can be quite solitary but that enables you to really work through your issues,” she explained.

“And there is so much pressure in society now to look a certain way but triathlon changed how I saw my body. I get a surge of joy when I think about how it has adapted.

“Running is part of my life now and I remember the first time I tried to ride up a steep hill – I couldn’t do it. But then I could and just thought my legs are amazing!”

This point chimes with the body image theme of this year’s Mental Health Awareness Week.

“So many girls follow these people on social media but it’s all so fake,” she said.

“That’s what I like about sport: there are no short cuts, you have to train your body to do the job. We just need to reconsider what we think of as a good body.”

It's #MentalHealthAwarenessWeek & the start of #RunAndRevise! Grab your 👟👟 & head out for some fresh air this week @MindCharityhttps://t.co/9DAMKGP2IApic.twitter.com/xu0MK0vU0n— England Athletics (@EnglandAthletic) May 13, 2019

And Box is willing to help us do that by getting more people into sport via England Athletics’ ‘Team Spirit Game Changers’ scheme.

“I’m the youth coordinator for my local running group and want to make it easier for all the underrepresented groups – BAME, women, 16-25, disabled – to start running,” she explained.

“Sport will help them build great resilience for the pressures of modern life – I’m more confident and stronger now because I did something outside my comfort zone.”