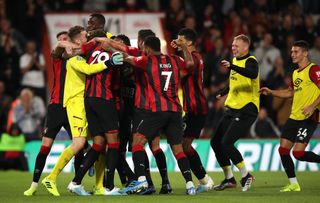 Eddie Howe was indebted to Bournemouth goalkeeper Mark Travers as the Premier League side squeezed past Sky Bet League Two Forest Green on penalties following a 0-0 draw in the Carabao Cup.

Travers saved from Joseph Mills, Kevin Dawson and James Morton as Bournemouth won 3-0 in the shoot-out.

Howe said: “I am relieved. We are kicking ourselves because we should have won. We had enough chances but were not clinical enough.

“Mark is an outstanding goalkeeper who has got every attribute you need. Today was a great experience.

“How was he going to handle the shoot-out? He did that. His three saves were top drawer.

“If you got through the penalty shoot-out is a really good experience for everyone to go through because you never know when you will need that again.

“But you don’t want to rely on the lottery of penalties.”

Howe made nine changes to the Bournemouth side beaten by Manchester City in the Premier League on Sunday, giving his fringe players the chance to impress.

The Cherries endured a frustrating 90 minutes as a combination of poor finishing and superb saves from Wollacott stopped them progressing in normal time.

The visitors could even have taken the lead against the run of play when Andrew Surman cleared off the line from Matt Stevens six minutes before half-time.

Rovers manager Mark Cooper was full of praise for the effort of his side.

Cooper said: “Not one bit am I’m gutted. I’m absolutely over the moon with that performance.

“We had lads who were playing at Aldershot and Nuneaton last season – non-league teams – competing against a Premier League team and we went toe to toe with them.

“It was a young group of players and I’m very proud of them.

“Our defending was immense. The players tactically carried out everything we asked of them. With a little bit of luck at the end, we could have nicked it.

“If we defend with that much desire and diligence for the rest of the season, we won’t lose many games.”

Bournemouth, quarter-finalists in each of the last two seasons, will travel to League One Burton in the next round.