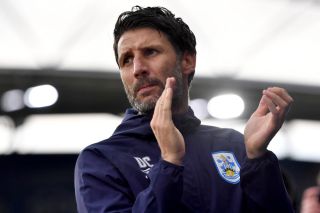 Danny Cowley urged his Huddersfield players to remain focused on the job in hand after beating Bristol City 2-1.

Goals from Benfica loanee Chris Willock and Karlan Grant, who struck from the penalty spot, did the damage before Famara Diedhiou’s late consolation at the John Smith’s Stadium.

Victory ended a three-match winless run and extended the gap between the Terriers and the Championship relegation zone to five points.

“It’s very important that we don’t get carried away, although this was a good performance,” said Cowley.

“We need to be more ruthless still, and we need to back this up consistently.

“I’m pleased with the work tonight, but there’s still work ahead of us.

“We were good tonight. We had much more conviction about our play and went two ahead.

“We should have got a third and fourth, but we ended up having to see the game out.

“Slowly but surely, we’re seeing our identity come to the fore.

“We’ve seen what the players are capable of, and that’s what I expect of them now.

“We want to find the consistency for our supporters. It’s been a challenging week and I’m so glad we delivered for them tonight.

“Chris Willock scores a great goal of individual quality and I’m really pleased for him.

“I must mention Steve Mounie who came on and did a selfless job for us.”

A third successive defeat dealt another blow to the play-off hopes of Lee Johnson’s side, who sit three points off the top six.

“The players know without doubt that wasn’t anywhere near the standard we’ve set over the years,” Johnson said.

“As a collective we haven’t performed anywhere near our level. Obviously the first-half performance was the bulk of it.

“It looked like we enjoyed football for a few spells but it’s very difficult to take.

“Today is a day we expected to perform better than we did.

“We were static, looked immobile, we had a very physical side and we didn’t win any duels.

“I feel upset and upset as I’ve been watching one of my teams with players I’ve signed.

“I’m not discrediting Huddersfield because they looked bright.

“What we’ve got to think about now is how we go from the level of the performance in the first half to get a result at Millwall.

“I feel sorry for Nahki (Wells) he’s come into a promotion-chasing side and he’s probably looking around thinking, ‘What’s going on here?’”