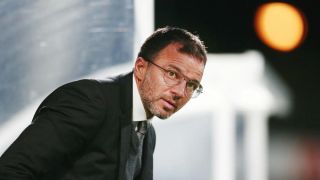 New Zealand head coach Anthony Hudson was proud of his side after they booked their place in a World Cup play-off at the expense of the Solomon Islands.

The All Whites surrendered a 2-0 lead to draw 2-2 in Honiara but progressed to an intercontinental tie against South American opposition thanks to an 8-3 aggregate triumph.

The visitors made four changes to the team that claimed a 6-1 first-leg win last week, with hat-trick hero Chris Wood among those rested, but they cruised into a two-goal lead inside 21 minutes through Myer Bevan and a Haddis Aengari Gagame own goal.

A penalty each from Micah Lea'alafa and Henry Fa'arodo drew the hosts level but New Zealand cruised through the stifling temperatures of the second half, with the result practically secure.

Hudson praised his players for coping with the conditions and the changes from the first leg during a much more difficult encounter than in Auckland last Friday.

WELL DONE | to coach Anthony Hudson and his team on qualifying for the IC Playoff in Nov. September 5, 2017

"It was a difficult game, we knew we were making a lot of changes," he told New Zealand Football's official website. "We had five changes in there in what was already a very light squad so I was just pleased to get the job done.

"Overall, I'm proud of the team. You've got to give credit to the home team, the crowd were very good and obviously they were giving everything and playing for pride and for their country. They gave us a real test.

"We had a few players out of position and I was really questioning how that would happen in the game. It was a tough game but, in the end, I was just pleased to get a tough point on the road and get through."

New Zealand will meet the team that finishes fifth in the South American qualifying section in a two-legged play-off in November, the winner of which will take their place in the group stage in Russia next year.

Argentina occupy fifth in the table with three matches remaining.

Solomons salvage draw but ease through to intercontinental play-off against South American opponentSeptember 5, 2017