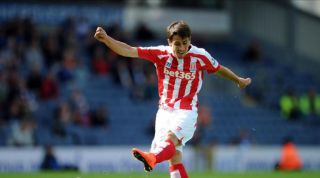 The former Barcelona forward made his Premier League debut in Saturday's 1-0 home defeat to Aston Villa and played the full 90 minutes.

Bojan's presence, along with that of fellow new boys Mame Biram Diouf and Phil Bardsley, was unable to inspire Stoke to victory in the club's first match of the season, but Hughes is confident the Spaniard will grow in stature with every game.

"I thought it was important that we got them some game time, certainly for Bojan because he's not been exposed to the Premier League," he said.

"I thought he showed glimpses in certain situations where he can show his quality.

"We need to be able to find him in those areas on more occasions than we were able to.

"As the season progresses, we certainly think that's what's going to happen.

"In this early period we'll have to make sure that he plays in the right games against the right opposition and we get the best out of him.

"It was important that he just got game time and he'll be better for it."

Next up for Stoke is a trip to Hull City in the Premier League next Sunday.