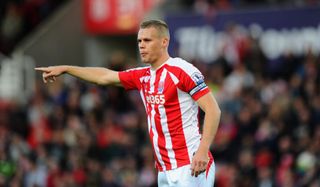 Shawcross conceded a spot-kick for grappling with Wilfried Bony in the penalty area during the club's 2-1 victory over Swansea City earlier this month.

The issue of holding in the box has been a hotly debated topic in the Premier League this week after several instances appeared to go unpunished in Manchester United's 1-1 draw with Chelsea last weekend.

Stoke manager Hughes believes centre-back Shawcross has been wrongly singled out for the issue in the past and has called for more clarity on dealing with the offence.

"Holding has always gone on in the game. I think Ryan Shawcross has been unfairly penalised as the culprit," said Hughes on Friday.

"It happens both ways - I did it as a player with defenders. We need clarity on where we all stand on the issue.

"My understanding at the beginning of the year was that is was difficult for them [referees] to look at every incident and that the only ones which would be pulled up on were those players who looked set to score, which wasn't the case in regards to Ryan.

"We are speaking to people who we feel have an influence about how strongly we feel about Ryan's situation. We are not going to stand for it and we have made that perfectly clear.

"I'm sure Ryan will be fine though. He has been portrayed wrongly in the media."

Stoke take on West Ham at the Britannia Stadium on Saturday without suspended duo Phil Bardsley and Peter Crouch, while Hughes also stated that a late check will be made on Marc Muniesa after the defender hurt his ankle in training.