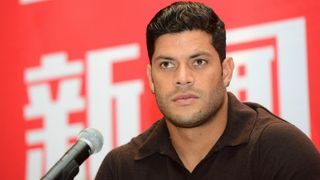 Hulk saw his Shanghai SIPG debut cut short by injury just 12 minutes after he opened the scoring on Sunday.

The Brazil international, who joined the Chinese Super League side for a staggering €55.8million fee last month, took just nine minutes to make his mark on his first appearance against Henan Jianye when he turned in Wu Lei's cross.

However, the 29-year-old pulled up after stretching to control a high ball and went to ground, clutching his left knee.

Hulk was then carried from the pitch on a stretcher while a club medic held an ice pack to the injured joint.

Shanghai went on to win the match 5-0 to climb back into third in the CSL table.