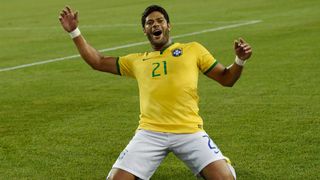 Zenit star Hulk has called on his Brazil team-mates to win back the support of the fans as they prepare to take on Venezuela in a World Cup qualifier.

Brazil were booed by some supporters during warm-up matches on home soil prior to the Copa America, after a perceived distancing of the team from their fan base during their friendly matches played abroad ahead of the World Cup in 2014.

The five-time world champions were beaten 2-0 by Chile in their opening qualifier for the 2018 finals last week, causing further unrest among some fans, and iconic former striker Ronaldo claimed in a recent interview that the current national team are uninspiring to watch.

Hulk, however, is determined to get the crowd back on their side when they host Venezuela in Fortaleza on Tuesday.

"When the Selecao comes to Fortaleza, we're well received," he said. "Unfortunately we didn't win the opener, but with the support of the fans, we need to make sure we bounce back with a big win.

"We've improved in every game and I'm sure we will respond with some entertaining football again. Everyone here plays for big teams, in Europe, and we have no reason not to work as a team. We want to give joy back to the national team.

"The pressure is positive at the beginning of the game, we know our capabilities and we have to be focused and get the support of the fans on our side. A quick goal will help a lot. I'm sure we'll be able to take advantage of the atmosphere."