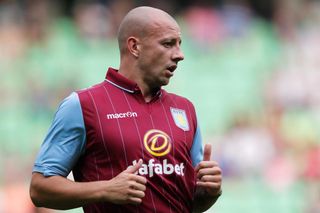 The Scotland full-back has not made a first-team appearance for Villa since Paul Lambert was appointed as manager in June 2012.

However, following loan spells at Nottingham Forest, Mallorca and Bolton Wanderers, Hutton has been given a chance to impress ahead of the 2014-15 campaign and did his cause no harm with the only goal at the Bescot Stadium - his first in a Villa shirt.

A victory for Lambert's men, albeit against modest opponents who fielded an experimental side and made wholesale changes at the interval with their League One opener at Port Vale just four days away, provides a welcome confidence boost.

Villa had been beaten in each of their previous two fixtures, losing 3-1 to Chesterfield, another side from England's third tier, and 4-1 against Eredivisie outfit Groningen.

On this occasion, the Premier League club - without Joe Cole and Darren Bent due to injuries - were able to make their superior quality tell courtesy of Hutton's 28th-minute strike, which saw the defender convert from close range following scrappy build-up play.

Although Villa enjoyed the majority of possession, Walsall had chances of their own, particularly in the first half.

Paul Downing was denied by Brad Guzan from point-blank range in the 37th minute, soon after Gabriel Agbonlahor had spurned a golden opportunity at the other end.

The hosts, who made 10 half-time substitutions, continued to battle manfully in the second period, but Villa ultimately prevailed with a degree of comfort and could have added a late second when Leandro Bacuna saw a header cleared off the line.