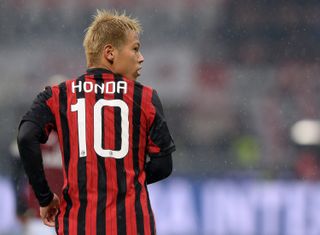 Honda made his first start for Milan since his move from CSKA Moscow earlier this month, but the attacking midfielder insists he has yet to show what he is capable of.

"I still have to further improve the quality of my game," Honda said.

"It was nice to be able to win this game. We had some problems in the management of the ball, so we need to improve this further, whilst also being able to score more.

"Speaking for myself, I would say that I am only at 50 per cent of my level of play."

Seedorf has already informed Honda what he expects of him, and the 27-year-old his hopeful he will continue to improve with each game.

"With him (Seedorf) I communicate perfectly in English,"he added. "We have had just a little time to talk about the type of football that he wants to play and what is expected of me.

"Even so, I am confident. Winning games like this against Verona also helps me to improve myself and this is what I want to do.

"I believe that we will face more and more opponents who will defend much and try to score against us only on the break.

"To win against these teams will improve our game. We will have to train hard for this."