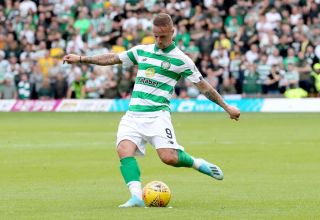 Scotland manager Steve Clarke decided against asking too much, too soon of Leigh Griffiths.

The Celtic striker had declared himself willing and able to return to the Scotland fold earlier this summer but he failed to make the squad to face Russia and Belgium in European qualifiers next month.

The 29-year-old has netted three goals this season after missing the last six months of the last campaign to deal with mental health issues.

“He was close,” Clarke said. “Listen, Leigh has got some fantastic attributes. I just look at him just now and he’s come a long way in a short space of time after a very difficult spell in his life.

“But at the moment I just feel it’s a little bit too early to push him.”

When asked if he had consulted Celtic on the decision, Clarke said: “You speak to people about certain individual players to get a little bit of background but the decision is my decision. That’s what I am paid for.”

Steven Naismith is in despite missing the last two Hearts games with a hamstring problem while Oli McBurnie, Johnny Russell and Matt Phillips are other attacking options.

Clarke is also missing players in central defence for the Hampden double header with Charlie Mulgrew joined by Liam Cooper of Leeds and Norwich’s Grant Hanley.

Clarke said: “In the last 24 hours, three central defenders that I picked the last time all went for a scan and all came back negative. So John Souttar out, Scott McKenna out, Stuart Findlay out through injury. So that has opened the door and gives a chance to people like Grant and Liam to come in and stake a claim.

“It’s been a while for both of them. Grant has started the season captain of Norwich, playing Premier League football every week can only be good for him.

“Liam is the captain of Leeds, top team in the Championship. I’ve been to watch Liam this season and was impressed with what I saw. It’s nice to get him in the squad.”

Here is your Scotland squad to take on Russia and Belgium.— Scotland National Team (@ScotlandNT) August 27, 2019

Robert Snodgrass is back in the fold after drifting away from international football during Alex McLeish’s reign but Steven Fletcher and Matt Ritchie are still missing after deciding not to join up with previous squads. Tom Cairney also drops out after being named in Clarke’s first squad.

The former Kilmarnock manager said: “You have conversations with players, some want to come back, other players maybe at a different stage of their career are looking after their body or fitness.

“International break can be a time to recuperate, especially when you get a bit older and get a few more miles in the legs.

“I don’t close the door on anybody. If players are not available at this moment in time, football is such a transient game that everything can change in the coming weeks and months.

“I always leave the door open and if people want to come and play for us and want to let me know they are available for selection, then that would be great.”

“I know Ryan well,” Clarke said. “I was Kilmarnock manager last season and we played Rangers seven times, so I saw Ryan up close and personal quite a lot.

“His form this year has carried on from the form that he had last year.

“He was invited to join the camp in the summer but Rangers pulled him out because of an ankle issue. He has started this season very well, his form has been good, and he deserves a place in the squad.”