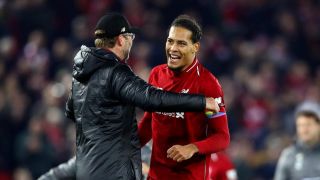 He accepted a misconduct charge and was hit with an £8,000 fine by the Football Association, but Riise does not feel the German manager showed any disrespect to his opponents.

"I think that shows passion," Riise, speaking at Golazio London, told Omnisport. "It was no disrespect to anybody, he just ran out because you can't really control your feelings when this happens.

"We all know Klopp was very passionate before, running up and down the sidelines and now he just went out on the pitch, I think it's great to see from a manager. I understand why other managers or fans react to it, we would've done the same thing if somebody else did it.

"But at the end of the day it's because of the passion and his love for the club, and he didn't celebrate in front of their fans or the bench, he just celebrated with his own players. I think that should be okay and I love to see it."

Liverpool will set a club record for points after 15 games of a season if they win at Burnley on Wednesday to move on to 39, two points behind leaders and last season's champions Manchester City.

And Riise, who won the 2004-05 Champions League during his time with the Reds, feels the big-money signings of Alisson from Roma and Virgil van Dijk from Southampton have been key to their improved defence.

"I think everything happened when Van Dijk signed, and then Alisson as well," said the Norwegian.

"Since Van Dijk came I think everybody just took another step. I think [Dejan] Lovren became better, the right-back became better, Andy Robertson and [Alberto] Moreno were better, the midfield was better. Everything just seemed to click when he came on.

"And I think that's all down to Van Dijk's aura when he comes in, authority when he comes in. Then Alisson this season, big money, but well worth it, and I think he proved in the Merseyside derby he's the one who decides whether we win or not.

"So I'm very impressed with Van Dijk, Allison, but the whole back four and also with how the team work together. I think they're more connected now and I think a clean sheet means a lot as a team. just to keep a clean sheet and they will keep doing that."

While Liverpool have thrived defensively, conceding only five times in the Premier League this term, their attack has looked less dangerous than in last season's run to the Champions League final.

Mohamed Salah has hit seven top-flight goals despite question marks over his form, while Roberto Firmino has netted only once in the league since the middle of September.

"It's all down to luck and confidence. Firmino is probably not at his best confidence-wise and in his performances, but he's important for the team anyway," said Riise.

"Salah the same, he keeps scoring goals but he could have a lot more if he was the same as last season. And [Sadio] Mane, it's going to come.

"That's why it's important when you go through this spell where everybody's not playing at their best, stay close enough because when we start playing well, we're going to fly. And that's what they're doing now, they're winning games, yes 1-0 is enough and they're staying close."

John Arne Riise's autobiography, Running Man, is out now in all good bookstores and online at decoubertin.co.uk/Riise.