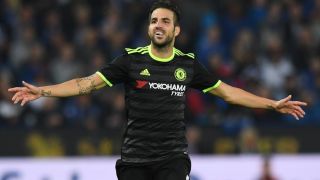 Chelsea midfielder Cesc Fabregas insists he never wanted to leave the club despite speculation over his future.

The Spaniard has been at the centre of transfer talk, having played just 32 minutes in the Premier League under Antonio Conte this season.

Fabregas was given a chance in the EFL Cup on Tuesday and netted a match-winning brace in a 4-2 victory over Leicester City.

The 29-year-old said moving away from Stamford Bridge was never a consideration.

"Real Madrid? Maybe they called me or maybe not. But I didn't think to leave Chelsea, not even for a second."

Fabregas said he was growing tired of the speculation over his future, insisting he wants to stay despite a lack of game time.

"I'm tired of the news that says that I'm offering myself to other clubs. I'm one more of the team and I will keep fighting to play here," he said.

He added: "I spoke with Conte. We like him very much, he's a great coach, very hard and he says the things very clear. We are very happy with him."