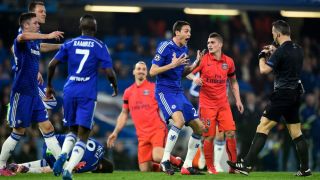 Ibrahimovic was sent off in the first half of PSG's UEFA Champions League round of 16 second leg at Stamford Bridge for a sliding challenge on Chelsea midfielder Oscar, with referee Bjorn Kuipers brandishing a red card.

The PSG striker was unimpressed by Kuipers' decision but reserved his greatest criticism for the home side, who surrounded the Dutch referee, jumping up and down in their fury at Ibrahimovic's tackle.

While the Sweden international slid in with both feet, he appeared to bend his knees to protect himself and pull out of the tackle, while Oscar challenged for the 50-50 ball by diving in feet first.

Oscar recoiled in pain after clashing with Ibrahimovic, rolling around on the ground, while the majority of Chelsea's starting XI sprinted towards Kuipers to make their feelings known, although the Dutchman appeared to have his red card out of his pocket before they could complain.

"When I got the red card all the Chelsea players come around," Ibrahimovic told Sky Sports.

"It felt like I had a lot of babies around me."

Ibrahimovic added later in a separate interview: "I don't know if I have to get angry or if I have to start to learn but in a game like this the referee, to give a red card after 30 minutes, he has to be 100 per cent sure.

"I think he was not sure until he saw the 11 players from Chelsea running around him and complaining. I have never seen something like this."

Despite Ibrahimovic's expulsion, PSG came from behind twice in London to claim a 2-2 draw after extra time, which sent the Ligue 1 club into the quarter-finals on away goals, with the tie finishing 3-3 on aggregate.

The controversial Swede claimed he was not surprised by his team's performance, as they dominated Chelsea, despite playing with just 10 players for almost 90 minutes.

"This is what I see every day. For me, it's not a surprise," Ibrahimovic said.

"The only thing is we showed it today and everybody else got to see it."