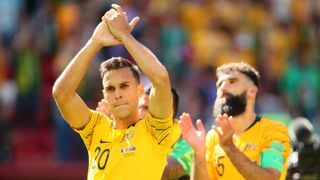 Australia defender Trent Sainsbury has "never been a fan of VAR", but is willing to accept it if it makes the referee's job a little easier.

The Socceroos were involved in some VAR controversy in their World Cup opener against France on Saturday, as Josh Risdon was penalised retrospectively for tripping Antoine Griezmann in the area.

Action had been allowed to continue for a significant period before the ball next went out of play and referee Andres Cunha paused things in order to look at a replay of the incident.

Upon seeing it again, Cunha pointed to the spot and Griezmann subsequently stroked home the resulting spot-kick, but the Uruguayan official was criticised by some for the decision and how long it took, with Australia coach Bert van Marwijk insisting he "didn't know" what to give.

But Sainsbury, although disappointed, feels sympathy for Cunha and his colleagues.

"I've never been a fan of VAR, I made that clear from day one," he told reporters at Australia's team base on Monday.

"I'm a purist when it comes to football, but at the same time if this is the way it goes from now on, I can't change that, you have to roll with it. I can't change the way I play because of it - I just have to keep rolling on.

"Football can be a game of seconds or millimetres. Referees have the hardest job in the world.

"If it [VAR] helps them, then I'm not really against that, but when things go for you you're happy and when they go against you you're not, so it is what it is and we move on."