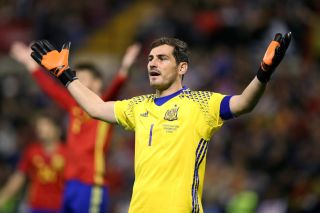 Iker Casillas was fortunate that his heart attack happened at Porto’s training ground where he had access to medical assistance, his agent has revealed.

Casillas suffered his health scare during the Primeira Liga club’s morning training session on Wednesday and was taken to the CUF Porto hospital across the city.

The 37-year-old goalkeeper, who won the World Cup with Spain in 2010, posted a picture of himself in a hospital bed on his official Twitter account later on Wednesday alongside the words: “Everything under control here, a big scare but with strength intact.”

But agent Carlos Cutropia, who described it as the “greatest victory” of Casillas’ life, admitted the consequences could have been greater had the goalkeeper suffered his heart attack at home.

Cutropia told Spanish radio station COPE: “He was not aware of what was happening to him, of having a heart attack.

“At no point did he faint or lose consciousness. He felt unwell but he didn’t think he had suffered a heart attack, he was only told after his operation.

“Then he was happy because he was well and what he suffered has not left him with any consequences.

“He has never had any symptoms. It is something that is not usual, especially in an athlete, and this has been a surprise for everyone.

“He had all the luck in the world. If this comes to you at home, the consequences would have been tremendous.”

Casillas had been training in preparation for Porto’s league game at home to Aves this weekend, although he is now unlikely to play again this season.

Outlining Casillas’ health scare, Cutropia said: “Iker was halfway through the training when his chest, his mouth, his arms hurt a lot.

“Quickly the medical team from Porto, to whom we thank for their professionalism, took him to the hospital.

“He has already begun to recover. In the afternoon I was already making jokes and it was the normal Iker.”

Cutropia said he had yet to speak to Casillas about his future in top-level football.

But he described him as a “fighter” and suggested there was no reason he could not resume his career when he felt well enough.

“At the moment that’s not something we’re worrying about at all,” Cutropia said.

“The most important thing is that he’s doing well and smiling. This is the biggest victory of his life.”