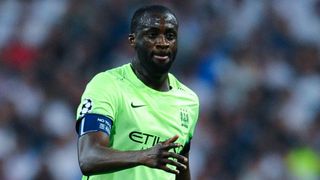 The Inter boss previously worked with Toure during his time in charge of City and was keen to lure him to San Siro ahead of the 2016-17 campaign.

However, Mancini has now admitted there is little chance the 33-year-old will continue his career at Inter.

"I say that he remains one of the greatest midfielders around in the game," Mancini told Sky Sport when asked about a potential move for Toure.

"But I think there is no chance he will be joining Inter.

"We have no regrets, though."

Toure has a contract with his current club until the end of the 2016-17 campaign, but his future at City is in doubt following the arrival of Pep Guardiola as manager.

Guardiola deemed Toure surplus to requirements at Barcelona in 2010, offloading him to City.