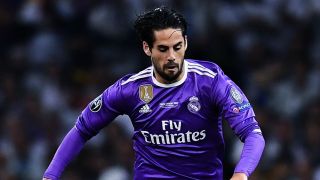 Real Madrid star Isco is full of confidence after ending his 2016-17 season with another impressive display for Spain against Macedonia.

Isco, who has one year left on his contract at Santiago Bernabeu, produced an impressive assist in Spain's 2-1 victory in Skopje on Sunday.

The attacking midfielder showed dazzling footwork to beat defender Kire Ristevski down the right and his square pass laid it on a plate for Diego Costa to score from three yards.

It capped a fine campaign for Isco, who cemented himself as a first-team regular under Zinedine Zidane as Madrid won LaLiga and the Champions League.

"I have finished the season very well," Isco told Teledeporte.

"Confidence is key for anyone. From the beginning of the season I have felt very comfortable.

"It may be [my best season] because Madrid have made history. When the team results turn out well, they boost an individual. I'm happy about the work I have done and for these three points.

"I have already said we are close [to a renewal]. I am very happy in Madrid and hope to be there for many years.

"Now it is time to rest as the season has been very long."

As well as picking up his first assist in Spain colours, the 25-year-old was heavily involved with five shots, three of which tested goalkeeper Stole Dimitrievski.

Isco feels any of Spain's players are capable of stealing the show as he turned his attention to September's crucial Madrid qualifier against Italy, who only trail Julen Lopetegui's men on goal difference in Group G.

"I think the game against Italy is going to be the most important match in the group," he said. "But we play at home, so I hope the Bernabeu is a stronghold. Finishing first is dependent on us.

"I'm happy to have the confidence of the coach. I think any of us who play can write the headlines.

"We are content with the three points because that is what we were looking for."