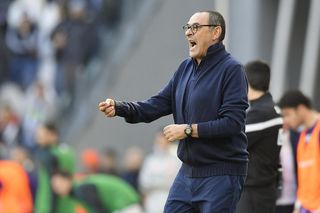 Juventus manager Maurizio Sarri appears to have got on the wrong side of the Italian Post Office after it hit back at his press conference comments.

Sarri, who took over at the Italian champions after leaving Chelsea in the summer, has failed to stamp his authority in Turin and has come under increasing pressure after Juve slipped off top spot in the Serie A table following Saturday’s shock defeat to Verona.

The 61-year-old insisted he was not fazed by the scrutiny at his press conference ahead of Thursday’s Coppa Italia clash with AC Milan by saying: “If I’d wanted to avoid pressure and facing tough tests, I’d have applied to work for the Post Office.”

But the Post Office was not prepared to take this lying down and delivered its riposte on Twitter.

The statement read: “With regards to the comment by Maurizio Sarri, ‘If I had wanted to avoid tough tests I’d have worked at the Post Office,’ Poste Italiane invite Mr Sarri to dedicate a few minutes of his precious time to educate himself on the fact the Post Office is the biggest company in the country, that it is chosen by young graduates as one of the most attractive companies to work for, that it is recognised among the top 500 companies in the world for quality of working life, that it has one of the best performances on the stock exchange in 2019 and is in third place, on the global scale, among Italian companies for image and reputation.

“The tests therefore – contrary to what Mr Sarri maintains – are certainly there for Post Office staff and the company answers to citizens, businesses and public administrations.

“We invite him to view our daily work in person at one of our 15,000 operative offices.”