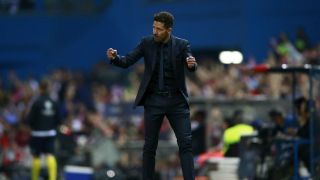 Diego Simeone could offer no explanation for Atletico Madrid's awful penalty record as they missed two spot-kicks in a 3-0 victory over Osasuna.

With the points long since secured, Atletico were awarded a penalty in the 89th minute of Saturday's LaLiga clash, but Yannick Carrasco was denied from the spot and Thomas Partey also fluffed his lines a minute later.

Simeone's men have now missed six consecutive penalties in the league and the coach is baffled by their continued failure from 12 yards.

"I cannot explain anything," he told W Radio. "It's difficult to explain – a penalty is an individual performance."

Carrasco, who scored twice before his miss, also struggled to identify the reason for Atletico's woes.

6 - Atletico have missed more penalties than any other side in La Liga this season (six out of eight attempts; 25% of accuracy). Problem. April 15, 2017

"Sometimes the goalkeepers make the saves, sometimes it's bad luck."

Despite the bizarre ending to the game, Simeone believes Atletico have plenty of reasons for optimism.

"I was left with a lot of positive things from the game," he said.

"[There was] the return of [Nicolas] Gaitan, [Jose] Gimenez's performance – he was very important in the middle of the field – a good match from Thomas [Partey], [Alessio] Cerci being on the team and also Tiago's return.

"These are many positive things that serve us for the present and the future."