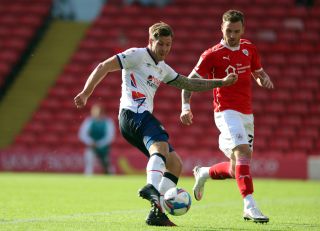 James Collins’ 71st-minute strike for Luton was enough to seal a 1-0 victory over Barnsley in their opening fixture of the Sky Bet Championship season at Oakwell.

The forward made the most of Pelly-Ruddock Mpanzu’s assist to get the Hatters’ campaign off to the ideal start as two of last season’s strugglers faced off.

The hosts, meanwhile, failed to capitalise on their chances in a match they will feel they should have won.

Barnsley created the first real chance of the game when Conor Chaplin picked up the ball and played a diagonal pass to Cauley Woodrow, who shot wide.

Home captain Alex Mowatt found space outside the penalty area, but his shot blazed over the bar.

Collins then had a huge chance that nearly gave Luton the breakthrough. Harry Cornick lofted the ball in towards the forward, but his effort cleared the crossbar.

The Tykes had a flurry of opportunities from set-pieces, but none could be converted.

Yet again from a set-piece, Barnsley had a great chance to take the lead after 40 minutes when Callum Styles floated a corner in, only for Mowatt to head the ball over.

Luton threatened Jack Walton’s goal just before the break. Luke Berry picked up the ball on the edge of the box, but his powerful drive went over.

The visitors nearly carved out an opening 10 minutes into the second half when Berry delivered a free-kick from the right-hand side, calling Walton into the action for the first time.

Substitute Kazenga LuaLua threatened for the visitors immediately after coming on two minutes beyond the hour mark when his low cross was blocked before it could reach the back post.

The visitors finally made the breakthrough after 71 minutes. Mpanzu nodded the ball down to Collins, who struck the ball into the top right corner, giving Walton no chance.

Barnsley nearly made an immediate response through substitute Dominik Frieser. Mowatt delivered a perfect cross from the left, but Frieser was unable to direct his header goalward.

After a late challenge from Mpanzu, Barnsley squandered an opportunity to equalise from 20 yards out when Mowatt’s free-kick was blocked by the wall and cleared comfortably.

The ball failed to fall for the hosts in the latter stages and a number of chances in stoppage time came to nothing, including one for Kilian Ludewig, who has returned to the club for a second loan spell