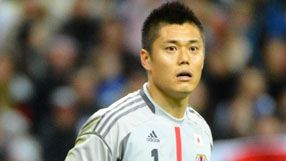 Praising Kawashima's performance in Japan's surprise 1-0 victory over France in a friendly in Paris last Friday, Laurent Ruquier's wisecrack drew laughter and applause in the studio.

He added that the Japanese Embassy in France had sent a letter of protest to the TV station France 2.

The letter said the remark "hurts the feelings of people affected by the disaster and hinders efforts for reconstruction," Fujimura added.

The nuclear disaster was triggered by a 9.0 magnitude earthquake and resulting tsunami in March last year. More than 15,000 people died and almost 3,000 are still unaccounted for.

"If it's true [he said it] it is behaviour which lacks sensitivity," she said. "Many people were hurt in the nuclear crisis. I don't know how people can make fun of it."

The Japan Football Association (JFA) also expressed its concern about the bad-taste gag.

"It's very sad something like this happens just when people's lives are finally starting to get back to normal," JFA vice president Kozo Tashima said.

"This cannot be dismissed simply as a joke."

He protested to the referee, who stopped the game to restore order. Kawashima was reduced to tears after the match.