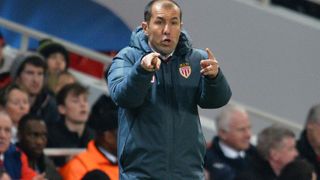 Arsene Wenger was expected to enjoy a successful reunion against his former club at the Emirates Stadium but Monaco had other ideas as the visitors put one foot in the quarter-finals.

Goals on either side of the break from Geoffrey Kondogbia and Dimitar Berbatov put the principality club in control in London.

Alex Oxlade-Chamberlain gave Arsenal some hope with a curled effort in the first minute of stoppage time, only for fellow substitute Yannick Ferreira-Carrasco to restore Monaco's two-goal advantage at the death.

Speaking after the match, Jardim said an organised Monaco outfit executed the game plan perfectly as they punished Arsenal on the counter-attack in a result no one anticipated.

"We analysed Arsenal beforehand and knew they were stronger in the first half of games and that they struggle a bit after the interval," Jardim said.

"We were very organised in the first half, and that allowed us to counter-attack with great effect in the second.

"Arsenal have some very good players and we were able to nullify that threat. Nobody thought this result would be possible. That said, Arsenal are a great team and we are only halfway through the tie.

"Football is an art. You need to know how to attack and defend; we are a very balanced side. First and foremost we try to look for stability so we can attack.

"It's very difficult to score lots of goals in the Champions League, so it's better for us to be an organised team. Tonight, this allowed us to attack Arsenal in the second half.

"I'm very happy with the result [but] we still haven't won anything; we're only at the halfway stage."