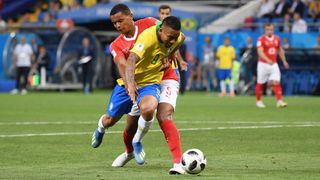 Brazil star Gabriel Jesus said he had no reason to play for a foul after having a penalty shout turned down against Switzerland.

Jesus went down in the area under a challenge from Manuel Akanji in the second half of the 1-1 World Cup draw on Sunday.

However, no whistle was forthcoming as Brazil – one of the World Cup favourites – were held to a draw in Group E.

Jesus, who had turned in the area before contact from Akanji, felt a spot-kick could have been awarded.

"I protected, I turned, the ball was clean in front of the goal," he said.

"There was no reason for me to play. I received the contact. If he interpreted that it wasn't a penalty, life is like that. As well as interpreting that the Switzerland goal [by Steven Zuber] wasn't a foul.

Philippe Coutinho had fired Brazil into a 20th-minute lead, but Zuber scored in the second half, the goal standing despite the 26-year-old appearing to push Miranda from a corner.

Brazil face Costa Rica in their second match of the tournament on Friday.