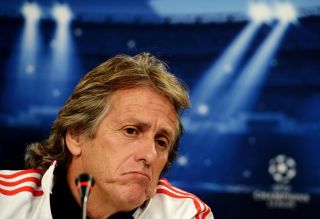 Alejandro Dominguez put the visitors ahead after 29 minutes, before the rain started to fall and a water-logged pitch killed the pace of the game after the break.

However, Oscar Cardozo did manage to prod home seven minutes from time to rescue a point for the Portuguese, and Jesus admitted that he would take a draw under the circumstances.

"I think this was a positive result because this is the UEFA Champions League, although the ideal scenario was to win," he said.

"Dominguez managed to win space in our defence and they created danger and scored a goal.

"Olympiacos have good players but we adapted well in the second half. It was impossible to play the kind of football we are used to playing.

"In this competition all teams can win at home or away and now we have to get a victory at least in one of the away matches."

The two sides meet again in Greece in a fortnight's time.