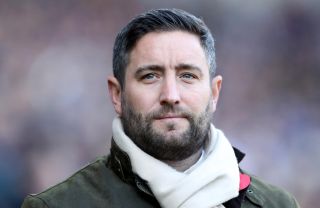 Both managers played down a fracas after the final whistle which saw Bristol City head coach Lee Johnson shown a red card following his side’s 4-0 home defeat by Brentford.

Angry words appeared to be exchanged between Johnson and Brentford manager Thomas Frank and referee Matthew Donohue judged the home boss to be the guilty party.

It was a bad end to a nightmare afternoon for City.

Johnson’s men were left with a mountain to climb when experienced defender Ashley Williams chopped down Watkins after 13 minutes, having just been booked.

Soon it was 2-0 as Said Benrahma guided the ball into an empty net after Dan Bentley had made a double save from Mathias Jensen and Watkins.

The impressive Watkins put the result beyond doubt by converting a low cross from substitute Jan Zanburek after 82 minutes and completed the scoring by drilling home the rebound when Bentley saved his 90th minute header.

Johnson said: “I was shown a red card but will appeal it. All that happened was that Thomas grabbed my cuff as we were talking and I ripped it away.

“Hopefully one of the cameras was filming at the right angle to prove my case. I have huge respect for Thomas and we will be having a drink together in my office.”

Of his team’s display, Johnson added: “It might seem strange but I feel quite positive about much of our play.

“You cannot go a goal and a man down so early to a team like Brentford and our sloppy start to the match did concern me.

“Ashley has apologised to the other players. He wasn’t the only one to make mistakes early on and we will have to look at that.

“But after their second goal I felt the players gave everything and we created some good situations. With the right additions this month, we can be up there when it matters.”

Frank saw star striker Watkins turn in another eye-catching display and said: “Of course Ollie’s form will attract interest, but I see no reason why he should want to leave this month.

“Sometimes in life you find yourself working at a special place and that is what we have at the moment.

“A player as good as Ollie will get more than one opportunity and I am very hopeful he will remain with us until the summer at least.

“Today was a really professional performance and a brilliant way to bounce back from defeat in our last game.

“Playing against 10 men is never easy and can change the mind-set of players. But we were clinical and our third goal summed up the way we want to play.

“What was said between me and Lee at the end will remain a secret. Football is an emotional game and I have no problem sharing a beer with him before we leave.”