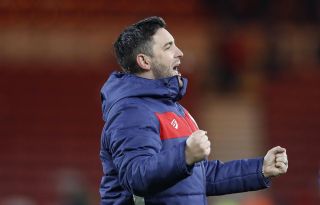 Lee Johnson likened his Bristol City side to “young gunslingers” as they shot down Middlesbrough to climb into the Sky Bet Championship play-off positions.

Adam Webster’s first-half header lifted City into fifth position in the table, with the 1-0 win at the Riverside following hot on the heels of Saturday’s victory over Sheffield United at Bramall Lane.

Having been on the fringe of the promotion race for much of the season, City are now at the heart of the battle for a place in the Premier League, and Johnson is delighted with the way in which his young side have risen to the challenge of competing in the upper echelons of the table.

Johnson said: “I was delighted with the boys. We have a big respect for the club, their players and managers and we were like the young gunslingers coming here. We had to deal with a number of different situations and had a bit of luck.

“They could have scored two or three but then after we scored we could have had two or three more. The boys were outstanding to a man and I am so proud of the way they protected our goal with their lives.”

Tempers flared in the second half, with the Bristol City bench criticising the way in which Middlesbrough’s players were presented with a towel to help with their long throws, only for the visitors to be denied the same level of assistance.

Johnson said: “We noticed the ball boy pops up out of the crowd with a towel and we asked the referee for it to be equal or kill the towels, hoping it would kill the towels because they have some big boys for some Rory Delap-style throws. It all got a bit confusing.”

Middlesbrough’s defeat dealt a serious blow to their play-off hopes, with Tony Pulis’ side now two points adrift of the top six after a run of five successive defeats.

Boro created a host of opportunities but were unable to convert any of them, with Jonny Howson and Britt Assombalonga both striking the post.

Pulis said: “The one thing I have to say is you can’t fault the players.

“We created five or six chances and even the free-kick we worked on this morning nearly came off. There is no way in a million years I can fault them for effort.

“I have been in this position before and I will just keep going. I am disappointed for the lads.

“We had 23 shots at goal tonight, 17 on Saturday. That is 40 in two games, I don’t think I had that at Stoke for a whole season, never mind two games.

“We got done with a set-play and they looked dangerous on the break. We looked really open and they countered well.

“Darren (Randolph) made a couple of great saves but all in all, there was only us and we needed that bit of luck.”