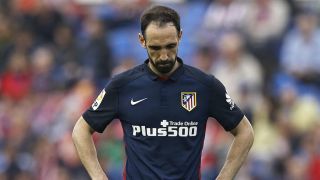 Juanfran says Atletico Madrid's La Liga disappointment will only serve to reinforce their determination to end the season with some silverware in the Champions League final.

Atletico lost 2-1 at relegated Levante on Sunday – a defeat which, combined with Barcelona's 5-0 thrashing of Espanyol – saw their hopes of regaining the title they won in 2014 come to an end.

It is now left to Barca and Real Madrid to battle it out on the final weekend of the season, with the Catalan giants leading by a point ahead of a trip to Granada, while Real visit Deportivo La Coruna.

But Atletico still have one major prize to play for as they take on Real in Milan on May 28 in a repeat of the 2014 Champions League final.

"The Levante defeat hurt a lot, that's the reality," said Juanfran. "We're a winning club, you look back and see the season we have done, all the effort and training.

"What we wanted most was to get to the last day with possibilities to win this title, so the defeat to Levante hurt.

"In the worst moments we have always come back stronger, and this will be one of them.

"In the Lisbon final I remember we lost, and things did not go as we wanted. Life and football give us a new opportunity.

"I hope we take advantage. I am convinced that if we play, we give what we have inside a little more than them, we will do well."