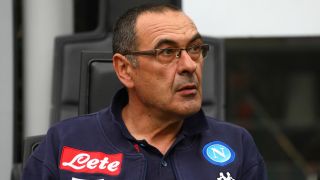 Maurizio Sarri believes Napoli were psychologically affected by repeatedly playing after rivals Juventus in the Serie A title race.

Juve sealed a seventh successive Scudetto with a point at Roma on Sunday as both they and Napoli kicked off at the same time, but that was not the case in earlier weeks when the pressure appeared to get to Sarri's side.

And their coach believes this had an impact, pinpointing a key defeat at Fiorentina the day after Juventus – beaten by Napoli in their previous match – had conjured up a late comeback against Inter.

"We needed to go to bed early on that Saturday night in Florence," Sarri told Mediaset Premium.

"The team suffered a psychological blow due to the timing and the way that result [Juventus winning at Inter] came about. The only regret I have this season is that we lost the Scudetto in the hotel and not on the pitch.

"We lost three games and always drew [the next match] after those defeats. This team is sensitive and certainly vulnerable in some ways.

"We have to work and Serie A has to do a lot of work. We played after Juve almost every time andm seeing as Juve pretty much always win, that badly damaged us."

Defender Raul Albiol, who scored at Sampdoria as Napoli won 2-0 on Sunday, agreed with his coach's assessment on where the league title was lost.

"We dropped points in Florence and that's where we really lost the Scudetto," he said. "We've got to focus on ourselves, continue working for our team and think of the future."