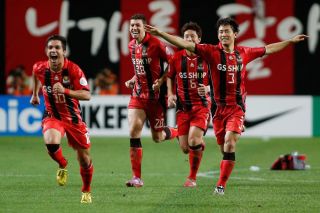 After a slow start to the season, Seoul have won three games on the bounce to sit seventh in the league standings.

Seoul stunned league leaders Jeonbuk Motors in round 22 and backed up that performance with victory over rivals Pohang Steelers to advance to the semi-finals of the AFC Champions League midweek.

The quarter-final tie was scoreless on aggregate at the end of extra-time, as Seoul upstaged Pohang 3-0 on penalties on Wednesday.

Wednesday's triumph, which set-up a final-four showdown with Australian side Western Sydney Wanderers, has provided Seoul with a confidence boost ahead of Jeju United's trip to the World Cup Stadium.

"This is my best experience as a coach. Our eagerness helped us win and we will keep playing our way in the future," Choi said post-game.

"The players have the ability to score, but in this game it was important not to concede so we prepared a lot of set pieces. In the games coming up, we will be more aggressive.

"We made many mistakes, but our real face traditionally only comes out in July and August as traditionally FC Seoul always are weak at the start of the season."

Pohang's shoot-out loss condemned the club to three games without a win in all competitions, having drawn (0-0 versus Gyeongnam) and lost (2-0 versus Jeonbuk) their past two games in the K-League.

"We did our best this year in the AFC Champions League and I appreciate what the players have done," said Steelers coach Hwang Sun-hong.

"We need more effort to go further next year and we will try and do our best in the K-League to make sure we qualify."

In other fixtures over the weekend, league-leading Jeonbuk will be out to return to winning ways when they travel to fourth-placed Chunnam Dragons on Sunday.

Jeonbuk had gone 10 games unbeaten prior to last week's defeat against Seoul.

The only highlight from the match was Jeonbuk striker and the competition's leading scorer Lee Dong-gook, who took his tally to 11 goals for the season.