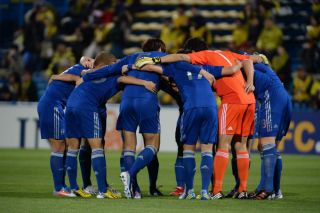 Jeonbuk Motors (41 points) and Pohang Steelers (40) won again last week to retain their hold on the top two spots in the K. League standings but third-placed Suwon (35) are within striking distance.

Suwon defeated Jeju United (31) 1-0 to leapfrog them into third position last week and the Bluewings will be aiming for their fifth win in six games when they travel to hapless Jeonnam on Sunday.

Suwon coach Seo Jung-won was thrilled with how his team executed a set-play from a free-kick to defeat Jeju with Kim Eun-seon peeling off to the back post to volley home the winning goal just before half-time.

"We practice set-pieces a lot in training," Seo said.

"To score the goal in that way, it feels like good practice."

Goals from set-pieces could be particularly important for Suwon as North Korean striker Jong Tae-se continues to struggle for goals - he has just one in the past 11 matches - while Brazilian forward Roger has just two in 16 appearances for the Bluewings.

But Seo's misfiring forwards could return to form against Jeonnam, who have conceded seven in their past four matches, scoring just once.

The Dragons succumbed 1-0 to Ulsan last week to drop to sixth - the final position in the Championship Round, which occurs in the final five weeks of the season - and Ha Seok-ju's Jeonnam have now lost four games in a row.

Ulsan (30, plus six goal difference) replaced Jeonnam in fifth as the Dragons (30, minus one) fell one position.

The top six positions could again be shuffled in round 21 with Jeju set to host Ulsan, while the top-of-the-table clash between Jeonbuk and Pohang on Saturday could be the match of the weekend.

Incheon United will look to register their fourth consecutive win on Saturday, when they travel to FC Seoul, while in other fixtures, Sangju Sangmu host Gyeongnam and Busan I'Park visit Seongnam.