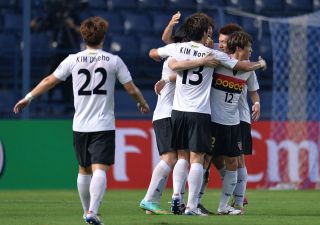 A Ko Mu-Yeol strike and a Choi Chul-Soon own goal appeared to have put Pohang in command, but newly promoted Sangju struck back to level through Yang Juna and Lee Sang-Ho.

But Pohang were not to be denied and made sure of the points as forward Kim Seung-Dae and midfielder Son Joon-Ho re-established the two-goal margin.

Ulsan striker Kim Shin-Wook took his tally for the season to five with a double to help the league leaders to a 2-1 victory over Seoul.

Lee Dong-Gook scored the only goal of the game as Jeonbuk Motors beat 10-man Seongnam 1-0, the former Middlesbrough striker finding the net after the visitors had seen defender Park Jin-Po sent off.

Suwon Bluewings avoided a third straight loss with a 1-0 triumph against Busan I'Park.

A late Jong Tae-Se goal proved to be the difference between the two, the forward netting three minutes from time to seal the win.

Jeju United and Gyeongnam played out a 1-1 draw, Serbian attacker Milos Stojanovic levelling for the visitors after Song Jin-Hyung had put Jeju in front.

Elsewhere, bottom club Incheon United are still winless, but did earn a creditable result by holding second-placed Jeonnam Dragons to a 0-0 draw.