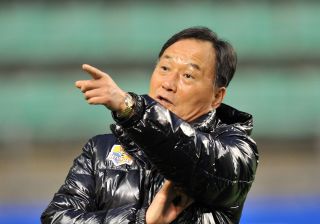 Kim Ho-Gon's Ulsan side took a five-point lead at the top of the standings as they secured a 2-1 home triumph over Suwon Bluewings.

Brazilian Rafinha put the 2005 champions into the lead on the 14th minute at the Munsu Cup Stadium, only to see his effort cancelled out by Seo Jung-Jin five minutes before the break.

But the home side were not to be denied the maximum haul and Kim Shin-Wook  secured the points in the 65th minute.

Pohang Steelers and Jeonbuk Motors trail Ulsan by five points, but the latter have the benefit of a game in hand.

Elsewhere in the Championship Round, Busan l'Park and Incheon United played out a 0-0 draw at the Asiad Stadium.

In the battle to avoid the drop, Gangwon earned a huge three points with a 2-1 victory over Chunnam Dragons on Sunday, and in the process extended their unbeaten streak to four matches.

Kim Yong-Kab's men went into a 2-0 half-time lead thanks to a Lee Woo-Hyuk  strike an a penalty from Lee Joon-Yeob on the stroke of half-time.

They were given a scare in the 68th minute when Lee Jong-Ho halved the deficit, but held firm.

They now move level on points with Daegu, who were just three minutes away from claiming a vital maximum haul in their 2-2 home draw with Seongnam.

Server Djeparov's penalty had put the away side into a half-time lead, but Baek Jong-Cheol's charges stormed back through Cho Young-Hoon  and Yoo Kyoung-Youl.

However, they were unable to see out the victory and in the 87th minute Kim Han-Yoon silenced the home fans to claim a point for Seongnam.

Gyeongnam remain firmly locked in the relegation battle after they fell to a 2-1 defeat at home to Jeju United on Saturday.

Bae Ki-Jong opened the scoring for the away side after quarter of an hour, only for Kang Seung-Jo to level proceedings in the 62nd minute.

However, they were level for just two minutes as Bae notched his second of the game, to leave Gyeongnam just three points above the relegation zone.