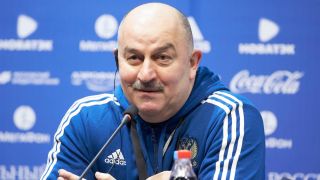 Former Manchester United star Andrei Kanchelskis has described Russia's World Cup team as the worst he has seen in his lifetime.

Stanislav Cherchesov's side kick off the finals on Thursday against Saudi Arabia at Luzhniki Stadium in Moscow before facing Egypt and Uruguay in their remaining Group A matches.

There is little optimism surrounding the host nation's chances of reaching the latter stages, though, with Russia winless in their last seven games and ranked 70th in the world by FIFA, the lowest of any of the World Cup competitors.

And Kanchelskis, who played for the Soviet Union and later chose to represent Russia, thinks problems within their football set-up have taken their toll.

"The football was better organised in those old days," Kanchelskis, who played at Euro 92 and Euro 96, told the Daily Mail.

"We had a traditional system. When the USSR broke up, our football went down. Now the level of Russian football is not great. Now there are problems.

"We are worried because it is the worst Russian team I have seen in my life. Everybody says it.

"There are some problems inside the team. There are some good players but they don't like playing for the national team because of problems with the coach."