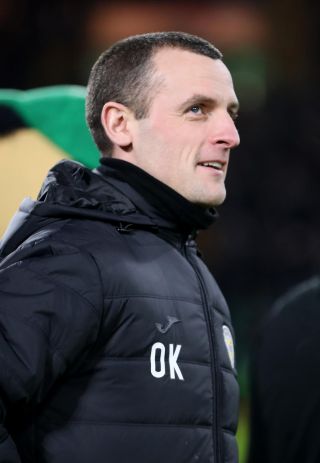 Oran Kearney insists it would be a “huge success” if St Mirren retain their Ladbrokes Premiership status.

The Buddies have been involved in a battle for survival ever since and are in the relegation play-off spot. However, their 2-0 home win over Hamilton on Monday night took them to within a point of third-bottom Accies with one set of fixtures remaining.

St Mirren travel to already-relegated Dundee on Saturday while Hamilton host St Johnstone and Kearney knows that staying in the top flight, either by league position or through the play-off against either Dundee United or Inverness, would be considered an “achievement”.

“I think it would be a huge success,” he said.

“I have won trophies as a player and as a manager before but this is a totally different predicament and with the story as everyone knows of this season, it would be a hell of an achievement from everybody attached to this club.

“There definitely hasn’t been any pressure because we find ourselves in territory that I don’t think anybody expected that we could get to, that is the beauty of where we are at this time.

“We have been chasing for a long time and the chase is still on.

“If I am being honest, probably at Christmas time, if you had given us this scenario at this stage of the season we would be delighted.”

Kearney has been linked with a return to Coleraine after the Bannsiders parted ways with Rodney McAree.

However, the St Mirren manager said: “It is not on my radar at this moment in time.

“I am focused 110 per cent of getting a result on Saturday.”