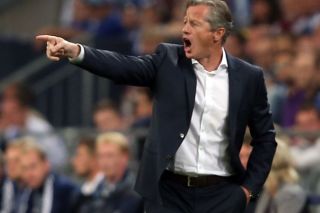 Jefferson Farfan put the Bundesliga outfit ahead with a 32nd-minute strike in Gelsenkirchen but Miroslav Stoch scored a crucial equaliser for PAOK in the second half.

Keller said his side's performance had been solid but urged them to stay positive despite being frustrated with the result.

"We are not happy with the final result. We played a great first half and performed as we wanted to and should have got a result from that," the 42-year-old coach told reporters after the draw.

"We were aggressive, attacked them early and earned the goal but then in the second half we didn't continue that level of performance.

"We stopped running and fighting hard for the ball, which is required to keep a clean sheet against good opposition.

"I think we had a good performance even though the result isn't satisfying. Luckily for us we still have the second leg, so the chances to go through aren't that bad and we have to stay positive and keep fighting."

Keller lamented Schalke's failure to create more chances, particularly in the first half, and said their final passes were poor.

"I think we had many good scenes, just the final pass was missing but we were good from the wings, the way we played especially in the first half was OK," Keller said.

The second leg, to be played in Greece on Tuesday, will be behind closed doors because of crowd disturbances.

PAOK coach Huub Stevens, who was in charge at Schalke from September 2011 to December 2012, was pleased with his team's second-half performance.

"We didn't play well on the wings in the first half, which is something that we cleared up at half-time," Stevens said.

"In the second half Schalke weren't so dangerous. We were more stable and we profited from that."