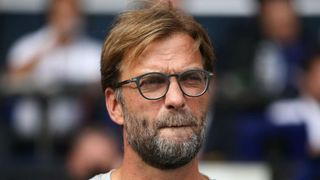 Jurgen Klopp felt Liverpool's performance in the 1-1 Premier League draw at Tottenham vindicated his decision not to start with Daniel Sturridge.

And he was restricted to a late substitute cameo at White Hart Lane after Danny Rose cancelled out James Milner's first-half penalty for the visitors.

"If you want to you can always talk to me about players who didn't start.

"You saw this was not the worst decision, this line-up. And then you have to change again in the game.

"We brought him [in], maybe a little bit too late. Unfortunately we didn't have the ball long enough to bring his quality [in to the game]."

Klopp was very pleased with how his players acquitted themselves in north London but felt they might have had a touch more assistance from the officials.

A marginal offside call went against Adam Lallana when Sadio Mane briefly appeared to have made it 2-0 after half-time, while Klopp was frustrated to see referee Robert Madley give Jan Vertonghen the benefit of the doubt over the division's current hot-button issue when he grappled with Joel Matip before a Liverpool corner.

"In football, against teams like this, you need a little bit of luck. If you [give] offensive advantage, it's not offside, 100 per cent," he said of the Lallana decision.

"If you want to give it, you give it. There were three, four times where it was not to our advantage, that's not too nice.

"But we can't make anyone [else] responsible for the draw. We need to have more chances. The goal was perfectly played. The ref thinks it's offside, we can't change it."

On the Vertonghen incident, Klopp added: "You have to ask the ref, I don't understand it. If he waits one second [before intervening] with the whistle, it's a 100 per cent penalty. Nothing else.

"Whose fault is it? We may have to make the corner quicker so the ref can't whistle. Ask him what's the real rule. I have no idea what's right.

"I would have preferred him to do nothing, wait, watch the situation and then it's 100 per cent a penalty."