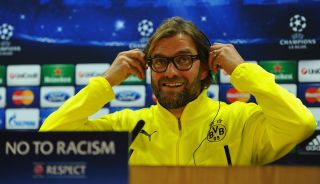 Dortmund took the lead in the Group F encounter thanks to Henrikh Mkhitaryan's goal in the 16th minute, only to go into the break level after Oliver Giroud's equaliser four minutes before half-time.

Robert Lewandowski then netted the winner eight minutes from time at the Emirates Stadium as Dortmund made it two wins from three matches, leaving them level in the group with both Arsenal and Napoli on six points.

And Klopp, who had to watch from the stands due to his suspension received for an outburst towards the officials on matchday one, was thrilled with the way his side played.

"It was a fantastic performance," he said.

"Arsenal are in sensational form at the moment and we managed to cause them a lot of problems. It was an open game, which we ended up winning thanks to a fantastic move.

"My team gave it their all tonight. We started very well, had a fantastic work rate when not in possession and created some superb counter-attacking situations for ourselves."

As well as praising the attacking prowess of his team, Klopp was pleased with the way Dortmund stood strong against the Premier League leaders to clinch the victory.

"Both teams battled hard against each other but we were always alert and ready to decide the game with one attack," he said.

"We took a 1-0 lead and although Arsenal are too strong to contain for the entire game they didn't end up having that many chances.

"After it (Lewandowski's goal) happened, we did a great job in the last eight minutes.

"It was a great performance and we were very mature."